The Defectors: Wrap-Up Pt. I, on Creating Space for Defectors 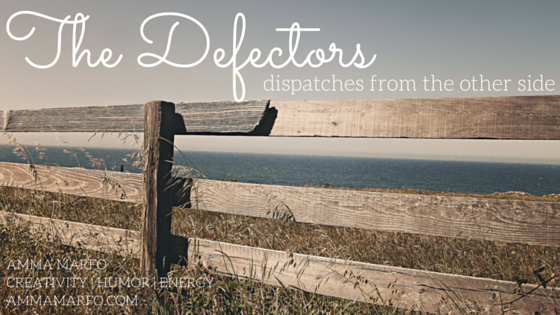 The Defectors project is, in some ways, pretty new for me and pretty familiar at the same time. It is the first blog series I’ve hosted, my answer to a challenge from a friend who encouraged me to “stop ranting and start creating.” But at the same time, my response reflected the things that I value: sharing stories, and positioning myself as a resource and a means to connect people. I hope this series has succeeded in doing that for you. Another round of heartfelt thanks goes out to each of my contributors, each kind enough to share their stories with us all- and special encouragement goes out to those who submitted with qualifications of “I’m not a writer.” You are, and I’m so appreciative of that fact 🙂

Even though we’re starting to see real research in attrition rates about departure from student affairs, I’ve always maintained that those numbers need stories behind them. Yes, there are people who are leaving the field to pursue wholly different endeavors- I have colleagues and classmates who are recording studio engineers, flight attendants, designers, real estate agents, and small business owners. But between campus-based professionals and the unaffiliated, there exists an intermediate designation that has grown wildly over the past few years. In large part, this series is for them. We/they didn’t leave the field, we just exist in parallel.

With all that said, I want to dedicate the rest of the month to two topics. The remainder of this post will provide recommendations on how to integrate the “higher education adjacent” into traditional functions of the field, where possible. Then, on Thursday, I want to talk about how to incorporate a bit of Defector DNA into a more traditional role. I fully recognize that defection is neither attainable nor desirable to everyone in need of a change. I’ll share a few stories from professionals who have found support on their campuses to adapt their jobs for their needs and interests.

But first, let’s chat about those living in the “in-between.”

As I’ve discussed in prior posts, the available space for higher education professionals off campuses is growing quickly. Professional associations, national organizations for fraternities and sororities, auxiliary organizations that provide technological and housing solutions, and independent contractors seeking to serve college populations can all become a home for professionals trained in higher education and student affairs administration. And all of these professionals are working – albeit differently and in different environments – for the benefit and ultimate success of college students. Yet, the field has not yet adapted to count these professionals as part of the community.

What do I mean by this? I think about conference registrations – which make independent professionals and those deemed “vendors” pay considerably more to participate in learning opportunities – and the challenges of obtaining professional organization memberships as key areas where relationships could be redefined. By finding ways for nontraditional practitioners to join and thrive in these communities in meaningful and less complicated ways, we can start to redefine the relationship that these folx have to the field as a whole.

I suspect that these unaddressed challenges are symptomatic of a larger problem: the “defector” life is wildly misunderstood. As I mentioned, this series was borne of a crush of questions- first the ones I asked before setting out on my own, and then later the ones I answer often from those considering making the leap.  By creating space for those living the defector life to share their stories – at conference, through webinars, and even/especially in graduate preparation programs – the curtain can be pulled back on this otherwise mysterious way of life.

I think back to my final year of graduate school, and the idea of doing student affairs work anywhere other than a campus was never mentioned. I’d worked in student activities for several years, and yet no one told me I could work at those agencies who we worked with to book talent. I learned to code in middle school, but the idea of working at a company that built and maintained software for housing and residence life departments never came up. These conversations need to change, especially if we plan to usher more people into the field with fewer and fewer roles for them to fill.

A closely related recommendation: let’s not relegate these alternative roles to “second place.” All too often, leaving campus-based work is framed as a backup or last-ditch plan, and the decision to leave it is viewed with a side-eye or hurt feelings from those left behind. And that language matters to those choosing to walk that path. In reality, we should celebrate anyone seeking to find fulfilling work- after all, that’s hopefully what we’d do for students when following a career path that both excites and can sustain them. So, then, think of those seeking a new path not as pushing themselves out, but as being pulled to something that they love and can succeed at. No, it’s not always easy- and I’ve written about my own challenges a number of times (here, and here). But at the same time, those who have defected know those challenges well.  Trust me, if your relationship calls for it, you’ll hear from them when they’re struggling.

Stay tuned for one last post in this series, to hear from a few folks who are innovating from inside the box to get that ‘defector’ field while in traditional roles.