In Praise of Athletic Black Hair

I worry a lot about things. Having anxiety just makes such concern second nature. I even worry through any of the athletic endeavors that I engage in- ranging from more competitive aspects of my life (gymnastics, rowing) to what I do now (running, intramural kickball). But one thing I give very little thought to, both admittedly and proudly, is what my hair’s doing. If it’s not in my face, that’s all I ever need.

As I watched Gabby Douglas bounce, fly, and smile her way to history this past week, I couldn’t help but be impressed by her poise and dedication. And yet, in the face of such a tremendous display of commitment, she received widespread criticism for something of less importance to her: her hair. Swept back and clipped away from her beaming face, she drew ire for showing tracks (the occasional downfall of having a weave as she does), and curly edges (a natural by-product of sweating, no matter the nationality of the woman). I couldn’t believe that such consternation was coming from something so inconsequential to this amazing young woman’s success.
I’ve seen many defenses of Gabby and her ability to prioritize- I will share here the thoughts of BET reporter (and my TV journalist husband) TJ Holmes, who said the following. 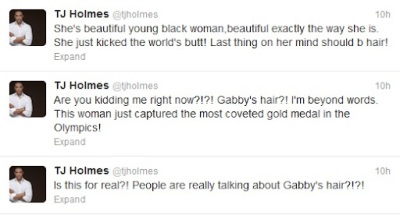 Without becoming too political, I will say that the African-American community is one that is often seen as extremely critical of itself. In the same way that women in general are constantly maligned for picking on one another, this community has engaged in similar tearing down of its members. Related to this is the disconcerting trend of Black women placing theappearance of their hair over that of their personal health and wellness. After getting your hair done, who wants to sweat it out? Admittedly, not many of us.  But that lack of desire to sacrifice outer appearance is hurting on the inside, an observation given more weight (pun not intended) by the sicknesses of a sedentary lifestyle overtaking so many African-Americans.
That being said, Gabby Douglas and her hair are her concern, and hers alone. And what’s more, she’s defining her self-worth by something more than the strands that sit atop her head. Her accomplishments are derived from so much below her head- an athletic body (I couldn’t make that happen for myself if my life depended on it!), strong shoulders, and that wonderful smile. She is a beautiful and highly poised young lady with a world of greatness ahead of her. And that greatness is going to come to her regardless of how her hair looks. So pin your hair back, salute the judges, and keep on flipping, Gabby. This Black athlete is so incredibly proud of ALL that you are.

One thought on “In Praise of Athletic Black Hair”