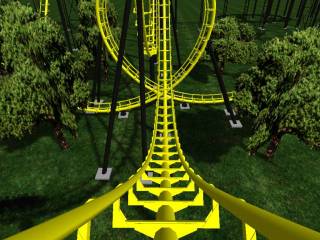 One of the really cool parts about yesterday’s race was the chance to meet new people. Yes, I followed the lead of my gregarious fellow runner Jeff Parker and met new people at a race! This woman’s name was Becky, and she started running shortly after her 50th birthday in July. She talked about how she had talked herself out of it for so many years, with fears of getting hurt or not being good at it, and finally decided to just go for it.

She referred to it as something pretty cool- running, for her, is an “age gauge”. That is to say, it’s something she’ll do for as long as the joy of it outweighs the fear. Think about young kids. They do things without fear, and you can tell they’ve matured when they think to not do these things. To me, an age gauge is the point at which thought overpowers action, and you back away from something you’d want to do based on overthinking it.

Another “age gauge” for Becky is rollercoasters. She, her kids and I are all Disney enthusiasts, and we talked a lot about how she keeps riding rollercoasters, despite the fact that she might be seen as too old for that (Author Note: at fifty? Not even close!). But she will deem herself old when she thinks about riding rollercoasters, and the idea of what could happen (falling, sickness, etc.) stops her from getting on and strapping in.

But then the interesting part came: she asked me what my age gauges are.

I had to think pretty hard about it. I talk myself out of things all the time; as an anxious person, we just do! But what, of those things, is done because of age? For me, it tied back into my work in some way. One of the things that I found myself excited about in this new position was the comparatively earlier hours. I asked during my interview about the length of events. When I was told most of them ended at 10pm, I found myself…oddly delighted. I loved my work with late night events for so many years, and my reaction to the possibility of being in bed by 10:30 surprised even me! So I suppose my gauge is being able to work late, but not too late.

Another one is, of course, Disney movies. The morning before, after oversleeping volunteer work, my instinct was to sit on the couch and do my monthly viewing (no joke) of The Adventures of Ichabod and Mr. Toad. And I don’t think anything of that, of the fact that my go-to movies are designed for 8 year olds. I suppose that when that becomes weird, I’ll be old. Translation: I’ll never get old 🙂

I had a great time talking with Becky, and she let me know about several other races in the area, so I hope that I’ll get to see her again! But in the meantime, think about it: what are your age gauges?

One thought on “What’s Your Age Gauge?”